How Wrapping Paper Derailed My Holidays – Parts I & II 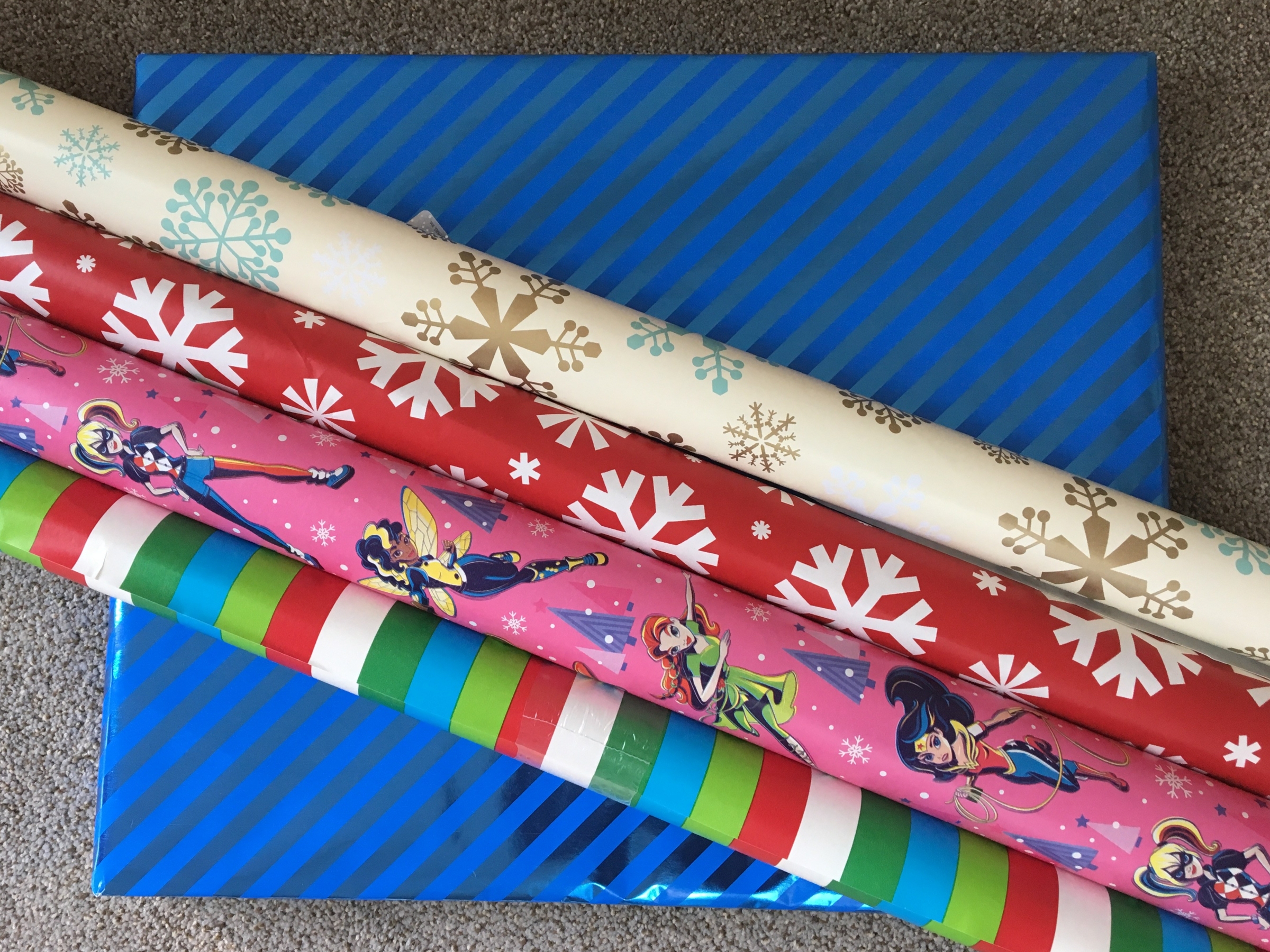 I’m a northern California Jew, born and bred in sunny San Jose, and now a proud Oakland resident. So what do I know about winter, let alone the snow? My parents emigrated from “Back East,” and my dad was actually born in a Siberian work camp, so it’s not surprising that they had little interest in taking me and my sister to the snow every February for “ski week” like the rest of my classmates.

I do have some winter “cred” though. I went to college in Boston and married an avid skier from Minnesota. While dating, and despite my initial reluctance, my now-hubby took me to Tahoe and showed me that there is something good about the winter – snow – particularly sliding down steep mountains of it on 1-2 expensive strips of high tech plastic.

Now as a mom of three young kids who celebrate both Hanukkah and Christmas, I have noticed some bizarre Jewish angst about the snow, that was lying buried underneath several other layers of Jewish angst. It surfaced this holiday season.

This December my dad gave me a great roll of wrapping paper – hot pink with pictures of super hero girls and snowflakes. He thought it would be perfect for his grandkids’ presents, but my mom made him give it away; she wanted “Hanukkah paper.” I thought my mom was being silly, but I was grateful for the free paper.

A week later, as I was choosing wrapping paper for my niece and nephew’s Hanukkah gifts, I avoided the snowflake paper and went for the blue stripes. So it’s not just my mom; it’s me too! Why can’t Hanukkah gifts don beautiful snowflakes like their Christmas counterparts?

Pandora has caught on to this trend too. Select one of their many Christmas stations and you’ll hear lots of winter and snow-themed tunes with no specific reference to Christmas, like “Jingle Bells,” “The Most Wonderful Time of the Year,” “Sleigh Ride,” and my favorite, “Baby It’s Cold Outside.” The Hanukkah station has little more than “Dreidel Dreidel” and Adam Sandler’s “The Hanukkah Song,” which might be the best holiday song ever performed.

Why does snow = Christmas? Snow comes in the winter, just like Christmas, but also like Hanukkah. Okay, Hanukkah often comes in late fall, but it’s snowing by then in most cold states.

Apparently my Jewish friends on the East Coast don’t share this conflict. For them, snow – plus paper snowflakes, hot chocolate, and even snow angels (gasp!) – are part of childhood, and don’t equate with the holidays. But for us Californians, and our counterparts in Texas, snow is unfortunately tied to Santa and his workshop in the North Pole.

This year, I want to reclaim winter. Okay, I know I never had winter in the first place, but it was kept at a distance from me and somehow became something only my Christmas-celebrating friends could enjoy. On some level I knew this growing up, but it was wrapping paper that revealed the depth of this connection.

Especially because my kids celebrate both Hanukkah and Christmas, I don’t want them thinking snow is just for Christmas, that paper snowflakes are Christmas decorations, that the gingerbread houses they make at school are a Christmas activity, that peppermint hot chocolate is solely a Christmas treat, or that hot pink wrapping paper with super hero girls and snowflakes is just for Christmas presents. These are all wonderful WINTER traditions that can be embraced by both holidays and both sides of my family.

My holiday wrapping paper anxiety has returned full force, showing me that my goal to “take back winter” failed miserably. Furthermore, my mother’s snowflake angst somehow seeped deeper into my subconscious since last year’s holiday season, causing increased levels anxiety during this most anxious time of the year.

As the Jewish parent in our family, I feel a strong sense of cliched Jewish guilt to ensure that Hanukkah is just as cool as Christmas. It’s a tough assignment. The smell of candles burning in the Menorah is lovely, but it can’t compete with the aroma of fresh spruce. Santa Claus and stockings brings more excitement and suspense than a high stakes game of dreidel. And while non-Jews might assume that eight nights of Hanukkah equates to eight nights of presents and sweets, what it really amounts to is at least a few nights of underwear, socks and rainboots, and a stomach ache from too many potato latkes.

But still, I try.

I make lists for the holidays, struggling to balance Hanukkah and Christmas – ensuring that the distribution of Legos, Harry Potter paraphernalia, Beanie Boos, books, underwear and socks is just right. As Hanukkah falls “early” this year, my list making, present planning and shopping began just as the Halloween costumes were hung back up.

On top of deciding who gets what for which holiday, my middle kiddoe was born on November 28, 2013 – Thanksgivukkah for those of you who note rare calendar coincidences. My present struggles are enhanced by trying to ensure that this little guy feels special on his birthday, without getting shafted in the present department come Hanukkah and Christmas. But trying to eradicate my middle child’s middle child complex is another topic for another time.

As of a few days ago, all of the Hanukkah gifts were neatly wrapped in shiny blue paper; the Christmas gifts in tasteful snowflakes. But that night, as I lay in bed, I completely rethought my gift distribution. My meticulous list of who gets what for which holiday was completely wrong! How did I not see this earlier?!

Now I am faced with a dilemma: My Hanukkah presents are donning the flakes, and the Christmas presents are encased in blue.

Environmentalism, thrift and common sense have won, and I will not be rewrapping any presents. That would be a disgraceful waste of resources – paper, money, and time. Rather than rewrap, I will worry. Will the grandparents notice? (Of course they will, but will they say anything?) Do my kids associate different colors and designs with the different holidays, or do they just care about what’s inside the paper? Is this all just in my head?

Hanukkah begins on Sunday night, and I know it will be wonderful, even if I did eff-up the wrapping paper.